Coreon is the only software that brings together the experts of knowledge and language in one comprehensive solution: a Multilingual Knowledge System (MKS).

Coreon unifies knowledge with language by combining Concept Maps (technically known as graphs) with Terminology Data. The concept map semantically links the individual entries (concepts) while each entry itself is elaborated into potentially dozens of languages with unlimited descriptive and documentary information.

The language neutral graph – linked concepts – is the core of Coreon’s MKS. 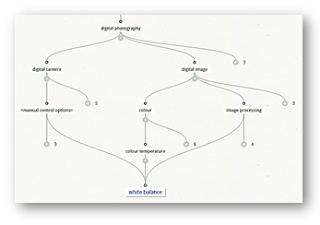 Concepts are linked in hierarchical broader-narrower including multiple parents as well as in associative relationships. Importantly, the linking is not per term but per concept. This way, the maintenance of the relations is not dependent from the labels, terms and their variants, but happens efficiently only once per concept. In other words, working on terms has no side-effects on the concept relations.

The MKS is always based on a full graph for all types of content, taxonomies and thesauri as well as semantically rich ontologies. Thus, for one set of concept nodes potentially several semantic maps (“sets of graph edges”) can be applied.

Human language is not deterministic, it is ambiguous (bank in bank institute vs. in river bank), it has synonyms and spelling variants (ATM – automatic teller machine – cash dispenser – self-service bank), and of course is multilingual (Geldautomat / Bankomat – guichet automatique – cajero automático).

In Coreon the concept model was implemented to capture: 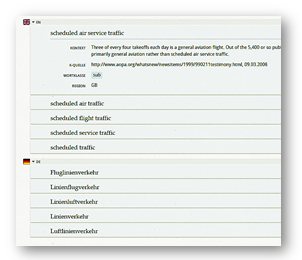 Even different terms can become “preferred”, to support different contexts and situations: for instance, once the full form European Central Bank, once its acronym ECB.

The two information types – knowledge via the semantically linked concepts, language via the terms – are modeled and stored separately from each other, but coupled through unique concept identifiers. This makes the concept map completely independent from the terminological information. This responds to a key pragmatic requirement: One concept map for all languages

In Coreon a fusion of the two relevant leading standards has been achieved: W3C’s SKOS with ISO’s TBX .

If you would like to know more please download the White Paper on Multilingual Knowledge Systems or contact us and we would be happy to answer your questions.
Posted by Gudrun Magnusdottir at Monday, February 29, 2016