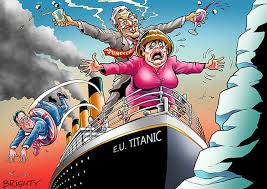 We need to thrive in our differences, become more local yet embrace our neighbors. Across borders we need interoperability not top down rule by legislation coming from Brussels. The only reason this is not implemented is the stale old rule of outdated institutions at all levels of governance. Governments have not evolved and continue to believe that they should lead their countries by totalitarian power as it was given them through a single election... This is outdated!
Posted by Gudrun Magnusdottir at Friday, June 24, 2016 No comments:

The AI hype as put forth by most of its advocates is way off! The reason probably to attract venture capital or create waves in the media such as Google and IBM proudly claiming"look how great our innovations are - our AI beat that and that human expert".  In a recent blog Prof. Roger Schank correctly stated about IBM Watson "They are not doing "cognitive computing" no matter how many times they say they are". In fact linking intelligence and knowledge to machine learning (ML) is a mistake. However, the statistical analysis ML provides to support human intelligence is in fact extremely useful when correctly positioned.

The other extreme - fear - AI taking our jobs or even eliminating us since AI makes computers smarter than us - hm...yes but it's not so hard to be smarter than us. How many jobs have already been taken by industrial robots for the past 40 years? How many jobs that we consider as intellectual has software already replaced? The list is very long! This is our evolution - the hammer was more powerful and precise than the hand - the wheel helped us transport - the computer replaced all secretaries and printers that had been working more or less the same way for hundreds of years and renamed them in different functions.

So what's the difference? Why are we as human beings worried when a statistical pattern matching algorithm puts forward answers that are better than ours. Is our long term memory weak when combined with a problem solving task? Yes, cognitively this is a weak point! Very few people excel to greatness combining long term memory knowledge and task resolution - they are people we admire! Just a sec - should we? Perhaps it is alright to allow a computer take over this part!

As human beings we excel at complex high speed decisions - grabbing a child about to run into the street in front of a car - danger is our element - I remember as a teenager steering a car off the road and up a steep hill. I realized the brakes didn't work - in front was a stopped lorry because of a single lane bridge and a facing car coming across. Police said "are you drunk" since my knees were so weak I couldn't stand. After examining the car they said "she saved your lives". AI would have been too slow and unintelligent to sum up all the factors and decide to leave the road it was programmed to stay on!

This is key - in AI everything we are talking about is programming - ML is just an algorithm. The hype is that we don't know what it does - sure we do! However, much of the fusion between ML and human knowledge is still to be explored beyond simple training interaction and knowledge systems such as ontology. These provide a bottleneck since ontology creation is costly and many try to apply ML to the task of creating knowledge resources. However, I would stay clear of using such resources for anything but gisting due to the error rate. This would endanger lives in self driving cars and other applications.

Yes, our world is changing and guess what it always has? Fears hold evolution back and delay the inevitable progress we face! What must change is the outdated economical system that underpins unequal wealth distribution and economic corruption - this is not the task of engineers but economists and governments - but perhaps we replace them first since they are obviously making very bad decisions :)

Our innovative and creative mind could be assisted by computers or will they be like other humans - the pessimistic Ior in Winnie the Pooh: nah this wont work - doomed to fail - etc.. - sure if we program them to do just that!

Posted by Gudrun Magnusdottir at Saturday, June 18, 2016 No comments: